KITGUM, Uganda: The Secretary Manager East Acholi Cooperative Union, in Kitgum, has been suspended from his job, the Cooperator News can exclusively reveal.

The Cooperator has established that Okumu Okello Boaz was notified by the chairman, Mr. Obote Acellam Karlmark in a letter dated March 15th, 2019, that we obtained. Upon return to Kitgum after nursing his sick son in a Kampala hospital, Okumu was handed the letter of indefinite suspension on March 25th, 2019.

In the letter, the board chairman East Acholi Cooperatives Union (EACU) Mr. Obote Acellam,  highlights issues such as unsatisfactory performance of duty, lack of provision of six AGM minutes as required under regulation 1992 section 26 (2), lack of accountability of Crop Finance advanced during the season, manipulation of accounts, like changing of the approved budget for AGM from shs10m to shs14m, other issues included failure to brand the union motorcycle and to implement the union resolutions, absence from duty without permission as well as spending at source, money advanced for the Annual General Meeting by Gulu Agricultural Development Company (GADC).

Obote Acellam said Okumu will be given half pay until his matter is sorted out.

When we had a phone chat with Mr. Okumu, he said all these woes were ignited by Mr. Bruce Robertson, the managing director GADC.

“Last year we agreed as a union and board that we borrow $224,500 as Crop Finance to buy cotton. GADC agreed to pay that money in six months but Bruce only paid once. He paid $89,500 and mid-way he faulted on further payments,” said Okumu.

He said the mistake he did as a secretary-manager was to write a demand note to Bruce notifying him of breach of contract. “Bruce then organized money, called for a board meeting, bribed the board members who turned against me. They disowned the demand note, saying as a board they were not aware of such a thing.”

Okumu said until now GADC has not fulfilled its pledge on the crop finance. “We don’t have cotton as we speak and farmers who supplied are demanding. I have been sacrificed for fighting for the plight of the farmers and the union,” cried Okumu.

He said that as a Secretary Manager he is answerable to union and signs all documents related to union transactions. “Bruce is behind all this saga because, after the $89,500 (shs331m) that they gave us (Union) out of the $224500 (shs829m), that they were supposed to pay us for buying cotton as crop finance, mid-way Bruce stopped paying the money,”

Okumu said that the union is still demanding $135,000 (shs499m). “initially, we should have taken Bruce to court for breach of contract, but he ended up pocketing the chairman and entire board,” said Okumu. He said the issue of branding the motorcycle wasn’t done because the board had not released funds for this activity. 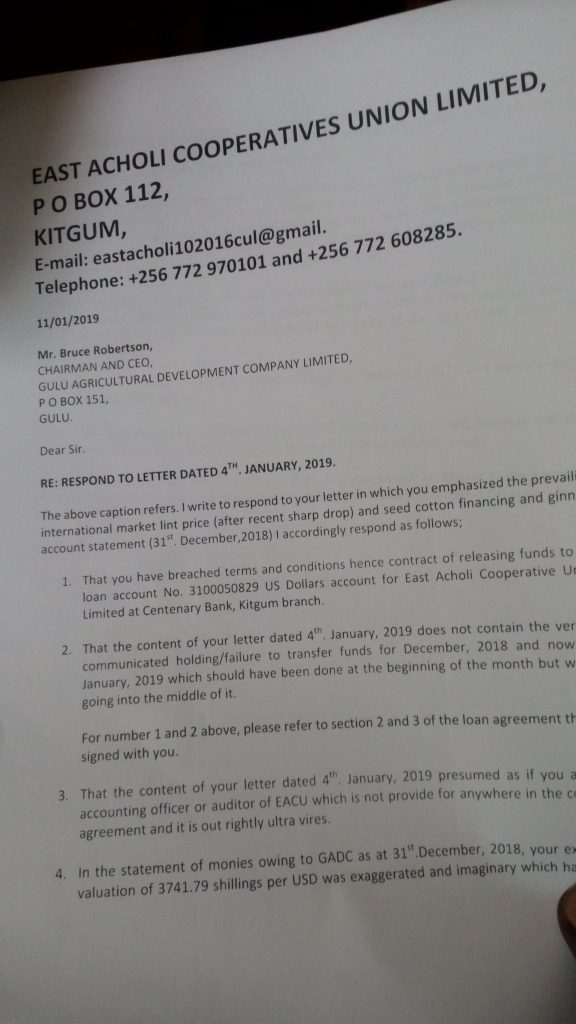 Safaricom to launch M-Pesa in Ethiopia in September