Jeanne Nyirankurunziza, a mother of four in her forties, runs a poultry farm with over 700 chickens, some village in Gasabo District, an outskirt in Kigali City.

She also rears cows and grows cash crops such as maize and sorghum. She does a little bit of tubers as well, such as potatoes and cassava.

Her income accumulates every year. She now affords good schools for her children.  They eat well and live a decent life.

This all began eight years ago when she chose to stop struggling with small investments from micro loans acquired from a village savings group.

The micro loans came in turns for each member after waiting for weeks. It was as small as Rwf100,000.

“I couldn’t invest in anything big with that money. I only stayed in a vicious cycle of poverty, and struggles,” she said.

She then thought of daring to apply for a bigger loan of Rwf1 million from a SACCO.

This was after several attempts to secure her husband’s blessings.

At first, her husband hesitated. He feared she would make losses and cause a disaster.

His fear hinged on an imagination of her failed business that would make the family plummet into poverty. Their house would be the collateral.

“I told my husband I wanted to do poultry farming, he first declined, saying “you might fail”

“As a mother who woke up at 4am every morning to go to the farm and plough while carrying a baby under the sun…you can’t do all that and prepare food for the children to eat on time,” she says.

“I wanted more for my family, so I had to convince my husband that joining a SACCO was the best thing for us as a family,” Nyirankurunziza adds.

He accepted. She applied and got the money.

She says today, after joining a SACOO, the difference is noticeable.

She has moved from Rwf1million to getting Rwf2 millions. It’s a better life she lives today.

“I have a caring maid who takes care of my children when am away. We get milk from the cows that the children drink…problems at home have reduced.”

Nyirankurunziza doesn’t have to wait for her husband to come home from work to provide. 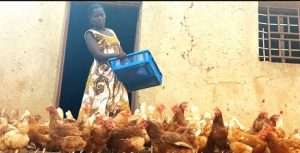 Community savings and credit cooperatives have been a financial inclusion success story in the country.

These cooperatives, known as Umurenge SACCOs, have served millions of Rwandans particularly in the countryside.

More than 90% of Rwandans now live within a 5 km radius of a SACCO, according to John Rwangombwa, the Governor of the National Bank of Rwanda.

Rwangombwa said these are results of Rwanda’s deliberate efforts to deepen financial inclusion across the country.

In 2008, the Finscope survey indicated that only 48% of the Rwandan population was financially included, prompting the government to lay several strategies to fix the gap. 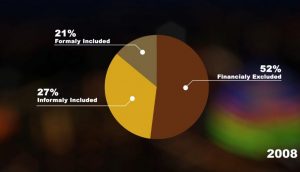 In 2009, a National Savings Mobilisation Strategy was launched with the goal to set up at least one SACCO at a the sector (village) level.

“Financial inclusion is a key channel for inclusive and sustainable growth,” he says.

“If you want to develop your population, the best thing to do is make sure they have access to financial services.”

During the just concluded global forum on financial inclusion held in Kigali, it was agreed that women and the static gender gap continues to be an important topic because countries are loosing out economically because of the untapped potential of women.

Dr Alfred Hannig, the Executive Director, Alliance for Financial Inclusion Management Unit, said that if countries continue ignoring the need to extend finacial service to women and youth, the world will continue experiencing economic burdens and poverty will remain rampant. 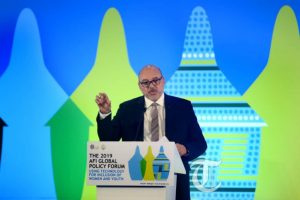 “Regulators need to actively include the needs of women in their work, if they are going to fulfil the commitment they made in the Denarau Action Plan and listen to the point made by the chair of the Gender Inclusive Finance Committee to ensure that no one is left behind,” he said. 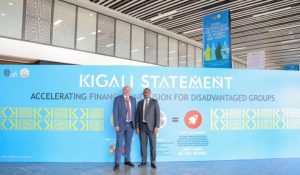 In emphasis, Rwangombwa said that Rwanda has made a strong commitment and set a target of ensuring 100% financial inclusion by 2024.

“I assure you that gender inclusion will remain top on our agenda as we strive to bring all our citizens out of financial exclusion,” he said.

Nyirankurunziza is a living testimony of what comes out of putting money in the hands of a woman. Dividends. And more dividends.

Her smile as she collects eggs before sending them to clients is enough to explain the effects of financial inclusion. (Source/ Taarifa)